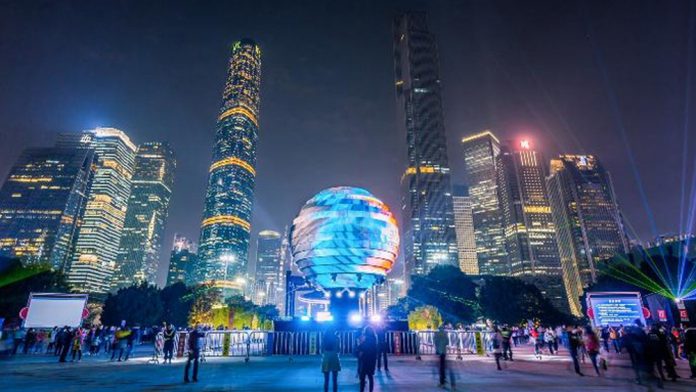 China’s growth has been impressive: from an agricultural economy into manufacturing powerhouse in just a few decades, China is now a fierce competitor in the technology sector, having Shenzhen as a great example of the world’s leading high-tech innovation centres.

This region is also at the core of a network supply chains connecting Guangdong to the rest of the world and is also supported by Hong Kong’s world-class financial and professional services and industries. In order for this region to grow into the “Greater Bay Area”, it is necessary to build a greater coordination of financial, material and human resources.

To know more about these cities, MyBusiness created a list where it’s possible to learn about the cities’ strengths, GDP and growth. (2016 data) 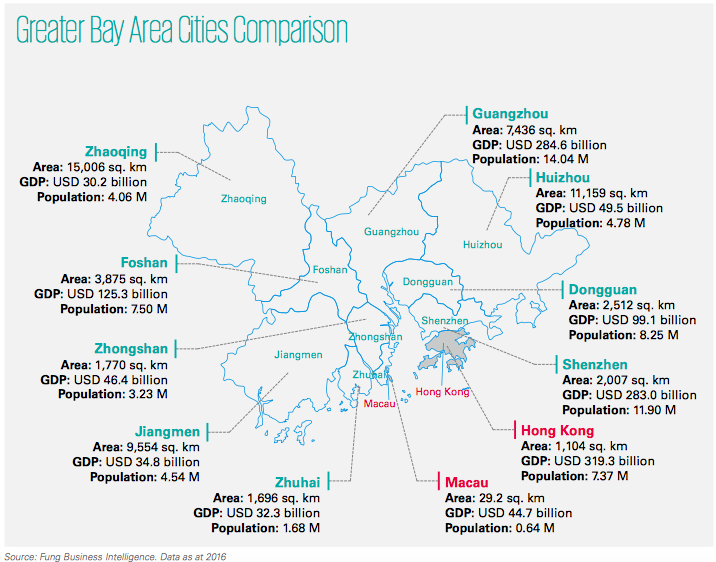 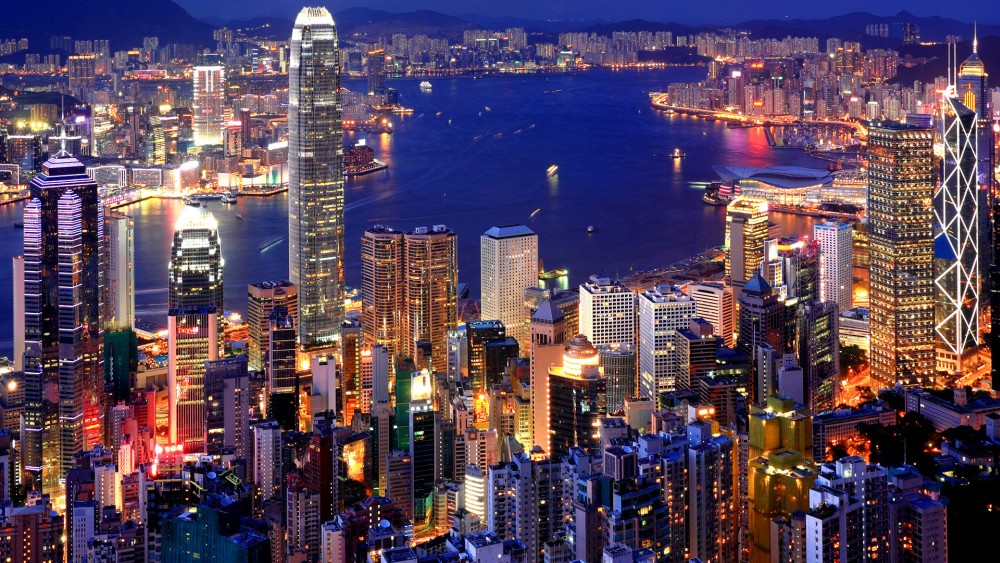 Hong Kong has been one of the world’s most competitive financial and business hubs, consistently presenting a high degree of economic resilience. This city’s strength relies in an effective protection of property rights and strong support for the rule of law. Hong Kong is characterized by a high degree of transparency and little tolerance for corruption.

Hong Kong’s entrepreneurial activity is supported by a regulatory efficiency and openness to global commerce. Hong Kong is the main transit point for exports and imports to and from China, strengthening the city financially.

Hong Kong integrated the People’s Republic of China (PRC) in 1997 under the “one country, two systems” agreement, where China compromised not to impose its socialist policies on Hong Kong, allowing the city to have a high degree of autonomy in all matters except foreign and defense policy for 50 years.

Hong Kong’s main industries are financial services and shipping, while manufacturing has migrated to Mainland China and other Southeast Asian economies. 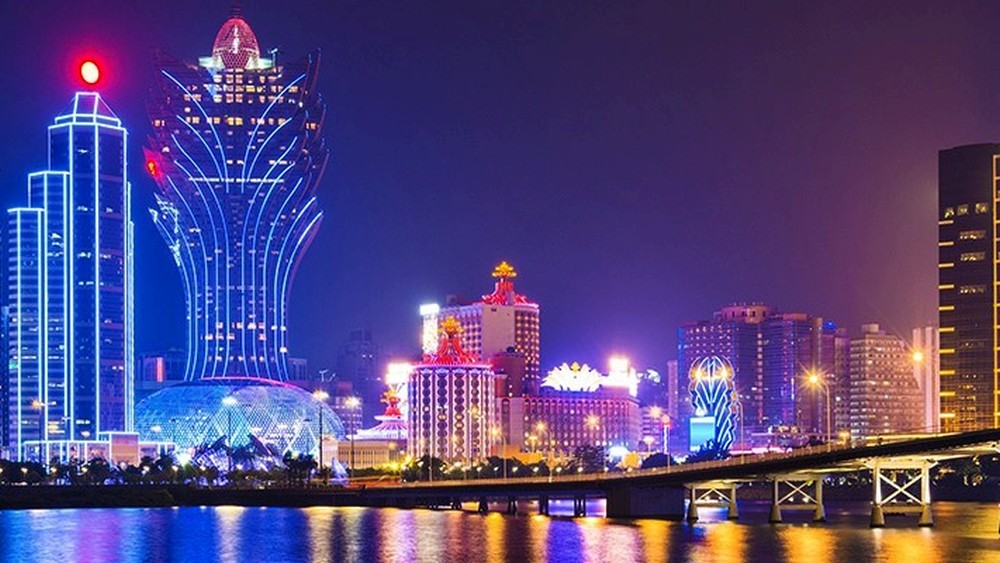 With a total GDP of $44.7 billion and more than 0,64 million people, Macao is known for its global trade and investment. The city has attracted more foreign investment since it opened up for the gaming industry in 2002. Finance, insurance and real estate have been growing in Macao as well.

The services sector is almost 90% of Macao’s GDP and 70% of total employment. The city has been investing in resort and entertainment projects and infrastructure, transforming Macao into one of the world’s leading go-to destinations.

Macao was colonized by the Portuguese in the 16th century and became a Special Administrative Region of China in 1999. Nowadays, the city is one of the world’s largest gaming centers and the only place in China where casinos are legal. In the gaming sector, the taxes account 80% of government revenue. 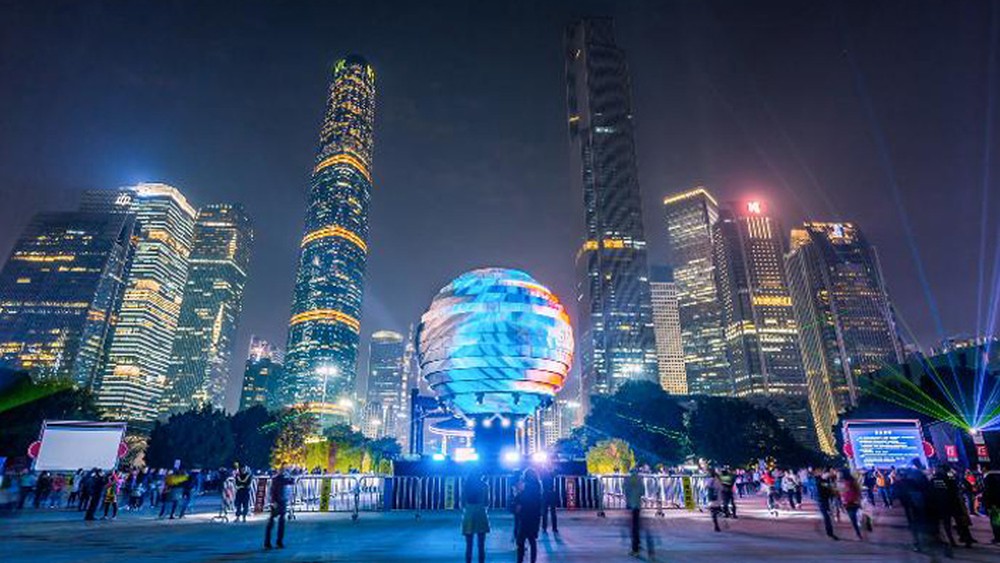 Guangzhou is one of China’s biggest cities. It is also the center of transportation, industrial, financial a trade sectors. It is a Special Economic Development Zone and an important trading city with Hong Kong. It has been focused in steel complex, paper mills, textile industry (silk, cotton, jute and synthetic fibers) as well in producing tractors, machinery, machine tools, refined sugar, chemicals, among many others.

Guangzhou still produces traditional arts and crafts, mainly ivory and jade carvings. It also has an international airport linked to Hong Kong by the Guangzhou-Jiulong RR. Highways built in the 1990s connect Guangzhou with cities on the coast.

The city also hosts great national trade expositions such as China Import and Export Fair, commonly known as “Canton Fair” since 1957, attracting thousands of business people from all over the globe. The fair takes place every spring and fall.

Guangzhou has a total GDP of $284.6 billion and a population of more than 14 million. 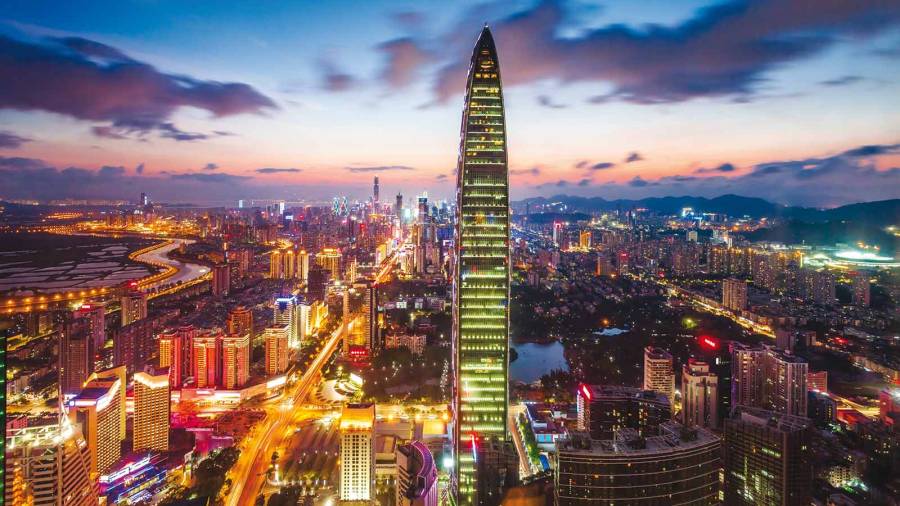 Shenzhen is one of the cities in the Chinese Special Economic Zone (SEZ) and one of the fastest growing cities in the world. In 2016, Shenzhen’s GDP reached a total of $283 billion, with 11.9 million people and an area of 2.007 square miles.

Shenzhen’s success is due to a vibrant economy that came from foreign investments. In that way, it was possible to modernize industrial infrastructure and a fair market order. Being southern China’s major financial centre, Shenzhen is home to the Shenzhen Stock Exchange and is the headquarters of several high-tech organizations. This fast-growing city has also the second largest deepwater container terminal in China, being the fourth largest in the entire world.

Shenzhen’s main industries include computer software, IT, microelectronics and components, video and audio products, electromechanical integration, light industry and energy. Industries such as pharmaceuticals, medical equipment, biotechnology and new materials have also grown in a short period of time. Telecom equipment manufacturing and electronics are the city’s largest industry.

Shenzhen was traditionally known as an export-oriented economy, but that is rapidly changing, since the city is focusing in a high-value added production and service. Shenzhen’s overall GDP grew by 16,3% yearly from 2001-2005, although growth has slowed around 10% per year since 2012. The government has since then been focusing in Shenzhen’s infrastructure, integration of the financial services sector with Hong Kong in response to the global economic slowdown. In terms of comprehensive economic power, Shenzhen is in the top ranks among mainland Chinese cities. 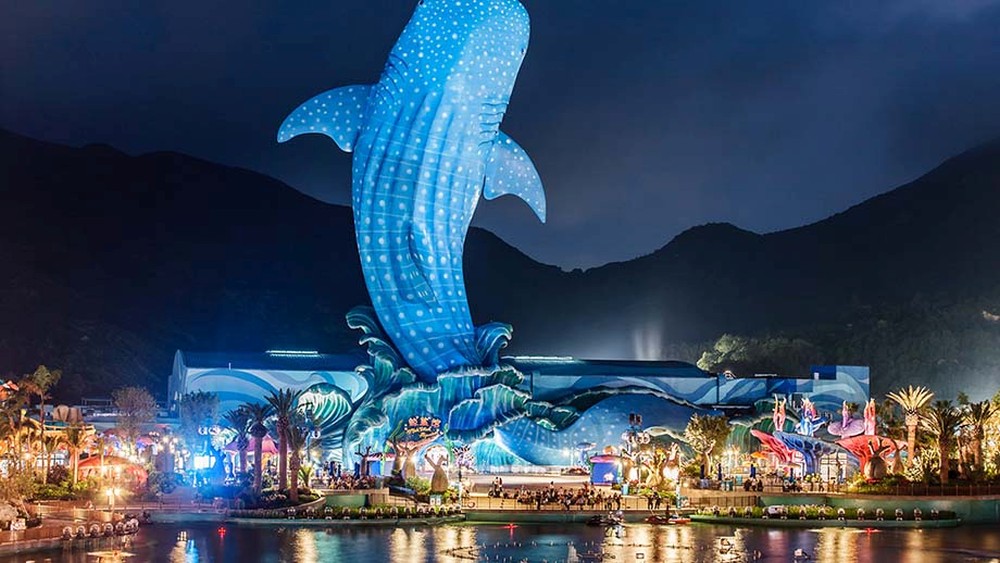 In 2016, manufacturing industry reached 28,8% of the utilized foreign direct investment in Zhuhai, followed by construction and real estate industries (19,7% each). In 2015, Hong Kong was Zhuhai’s largest source of investment, accounting 52% of the city’s total Foreign Direct Investment (FDI).

Tourism is a huge part of Zhuhai’s economy, placed third in terms of foreign and domestic tourist numbers in 2015, with 20.18 million visits. The city is also planning to build an eco-tourism industry that focuses on ecology, sightseeing and leisure, between many other measures.

Zhuhai is one of the nine cities in Pearl River Delta (PRD) with a total GDP of $32.3 billion and a population of 1.68 millions. 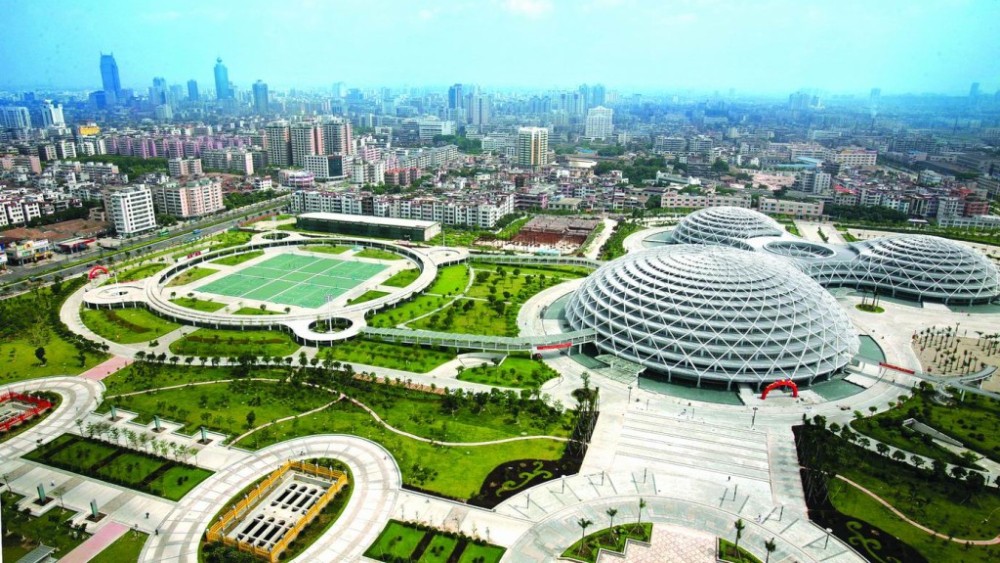 Foshan’s privately-owned companies are 70,4% of all the city’s commercial enterprises. This city’s GDP represents the largest share overall.

In 2015, Foshan was designated as a pilot city for the reform, transformation and upgrading of China’s manufacturing base. Therefore, the city has emerged as a key player in a number of main industries sectors such as machinery and equipment, electronic information, food and beverages, fine chemicals, pharmaceuticals and homeware.

The “Sino-German Industrial Service Zone” was established in Foshan as a high-end international cooperation zone for all Guandong’s industries, aiming to attract and nurture industrial technological services.  The Zone focuses in developing Fohsan’s high-end technology services, facilitating and strengthening  cooperation with its European partners’ high-tech sector. It is expected that by 2020 the city will be home to 300 international industrial services organizations.

As of 2016, machinery and electrical products represented 53,5% of the city exports with 7,4% of them also designated as high-tech products. Foreign-invested organizations contributed 41,4% of exports.

With a total population of 7.5 million and in line with Foshan’s “13th Five-Year Plan”, areas such tourism, cultural and creative will be prioritized and the potential of experiential tourism (traditional tourism with opportunities to tour leading manufacturing plants) will be explored. 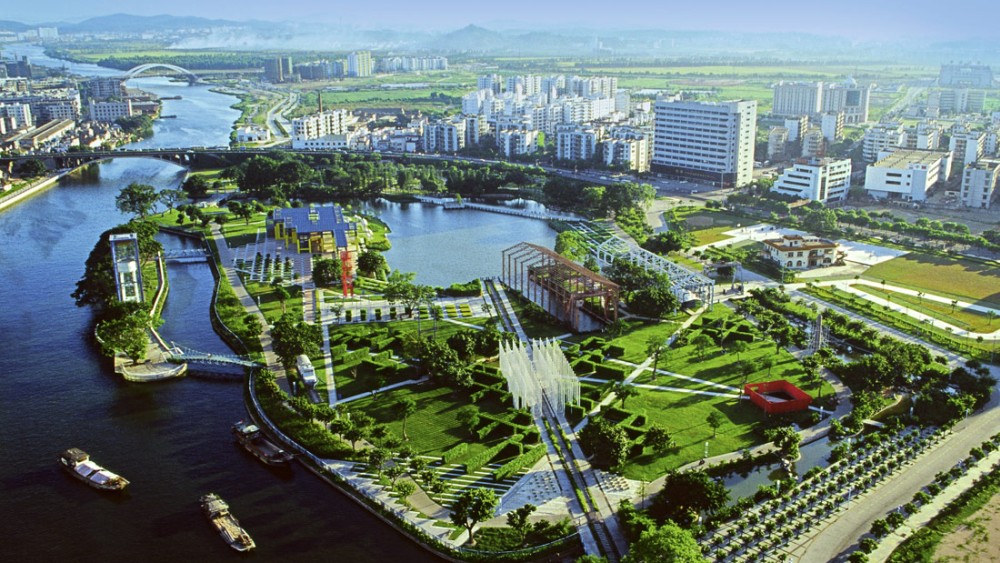 Zhongshan has been known to excel in industries such as home appliances, garments, electronics, lighting, furniture and hardware. Regarding the textile and garment sectors, Zhongshan is best known as a production centre for leisure and denim wear, being also a key player in the electronics manufacturing and audio electronics areas.

The city has a total GDP of $46.4 billion with 3.23 millions of people and it is also expected that Zhongshan will develop highly cost-effective agricultural formats, including leisure agriculture and tourism agriculture.

In 2016, Zhongshan’s exports, machinery and electrical products accounted 70,7% of the total, while foreign-invested enterprises contributed 59%. As of 2015, 51,5% of the foreign capital was invested in Zhongshan’s manufacturing sector.

In addition, Zhongshan aims to establish itself as an integrated transportation hub for the west bank of the Pearl River. This has seen the construction of the Shenzhen-Maoming railway and its connecting lines in an bid to boost transportation connectivity with the cities of the east bank. It is believed that this will make a huge contribution towards facilitating regional transportation integration via the Hong Kong-Zhuhai-Macao Bridge. 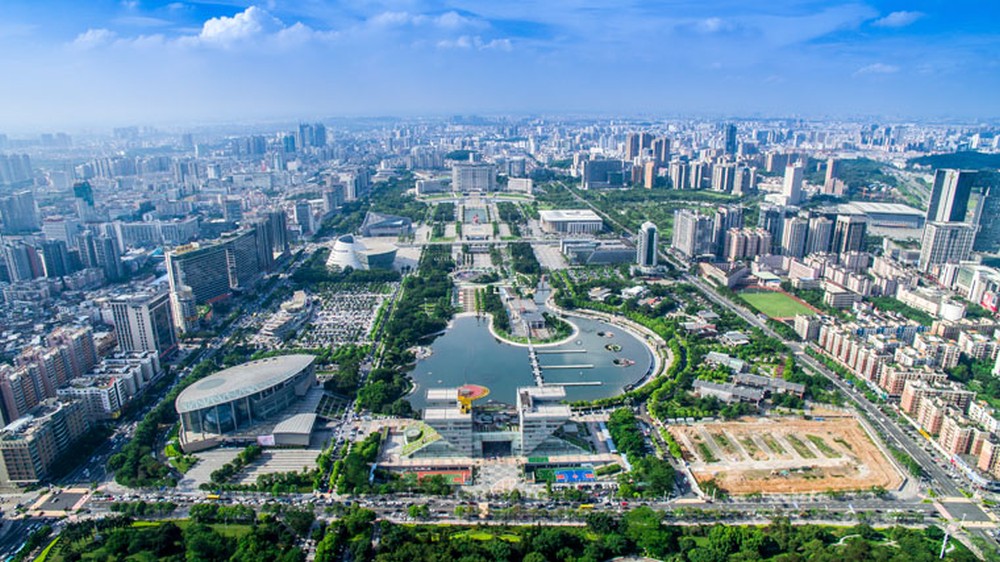 Dongguan is globally known as a manufacturing base and one of China’s most important exports centers with machinery/electrical products and high-tech items being its primary growth areas. Today, Dongguan is home to 11.000 foreign-invest enterprises due to its comprehensive industrial chain and wide range of support sectors.

With a total of $99.1 billion and 8.25 million people, the city’s five pillar industries are electronic information, electrical machinery and equipment, textiles, garments, headwear and footwear, food and beverages processing, paper making and paper products. In 2016, the total value-added industrial output of all of the enterprises in these five sectors was $29.3 billion, 8,5% more than the previous year.

Dongguan aims to establish a state-of-the-art sector that is able to meet all the advanced manufacturing industries’ needs. It is anticipated that by 2020, 63% of the services sector will be a high contemporary standard and have an expertise in finance and insurance, services outsourcing, exhibition and business management and deliver the required standard of health and elderly care to local residents.

It is expected that the city will evolve into an e-commerce logistics hub with a cloud-compatible intelligent logistics network, an innovative use of the Internet of Things technology and state-of-the-art geographic information resources.

In 2016, Dongguan total exports, machinery and electrical products represented 71,1% and 39,4% of them are high-tech products. During this period, the city used $3.93 billion of overseas capital, with 43,2% of it invested in the manufacturing sector. 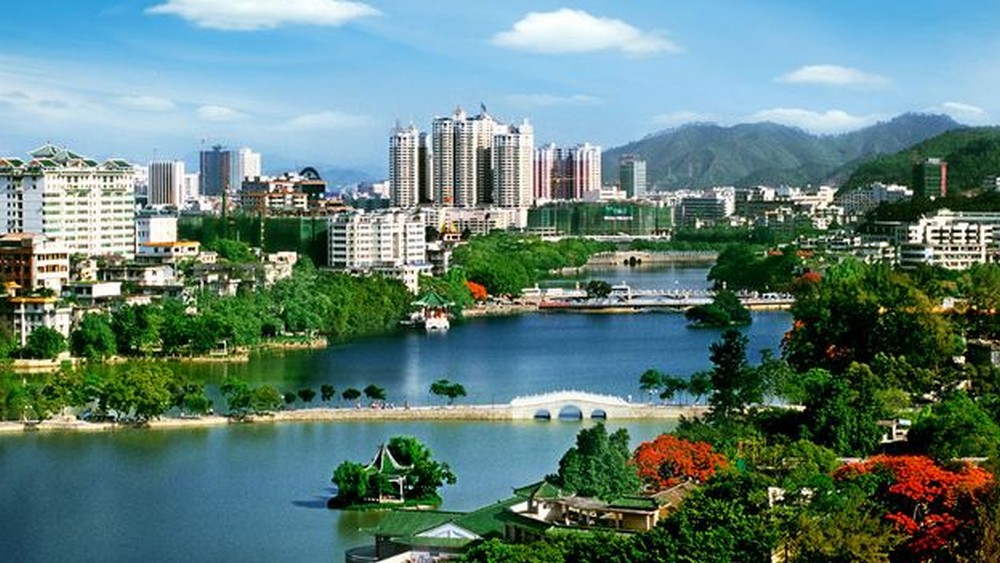 Huizhou’s main industries are petrochemicals and electronic information, both representing 52,1% of the output of all industrial enterprises. The city also plans to develop the automotive, equipment manufacturing and clean energy sectors within the next 5 years and upgrade traditional industries such as small home appliances, footwear manufacturing, marine and capture fishery sectors.

A number of the city’s enterprises are working to take a lead in solar photovoltaics, offshore wind power and nuclear power as well. These measures lineup with Huizhou’s commitment to establish itself as one of Guandong’s primary clean energy production centres and as a global supplier of high-energy green batteries.

Regarding the local services sector, the city has been focused on developing the port and aviation logistics industries, aiming to act as logistics hub for the entire Eastern Guangdong, Southern Jiangxi and Western Fujian areas. 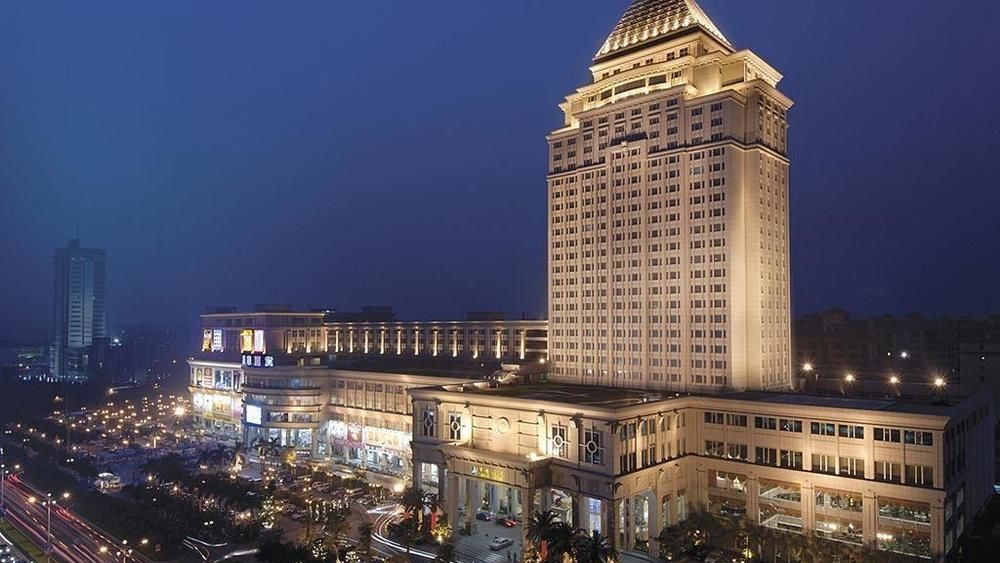 In terms of the city’s main industries, motorcycle manufacturing occupies the third place: in 2016, the city produced 2.55 million motorcycles, around 39% of the total number manufactured in the whole of Guangdong. Innovative e-commerce for the manufacturing, agricultural and tourism sectors will also be prioritized.  In line with the long-term goal of establishing the city as West Guangdong’s key logistics hub, Jiangmen aims to develop its logistics sector.

Jiangmen has a total GDP of $34.8 billion with the tourism sector representing 6,5% of the city’s GDP. From 2012 to 2016 this sector grew an average of 20% per annum for five consecutive years. In 2016, Jiangmen was appointed as pioneer in the development of China’s characteristic international tourist destinations by “China national Tourism Administration”.

Jiangmen has a total population of 4.54 millions. In 2016, the city’s exports represented 2,5% of Guangdong’s total exports; 49,5% of the city’s exports were sourced from Hong Kong and 49,9% was allocated to the manufacturing sector. 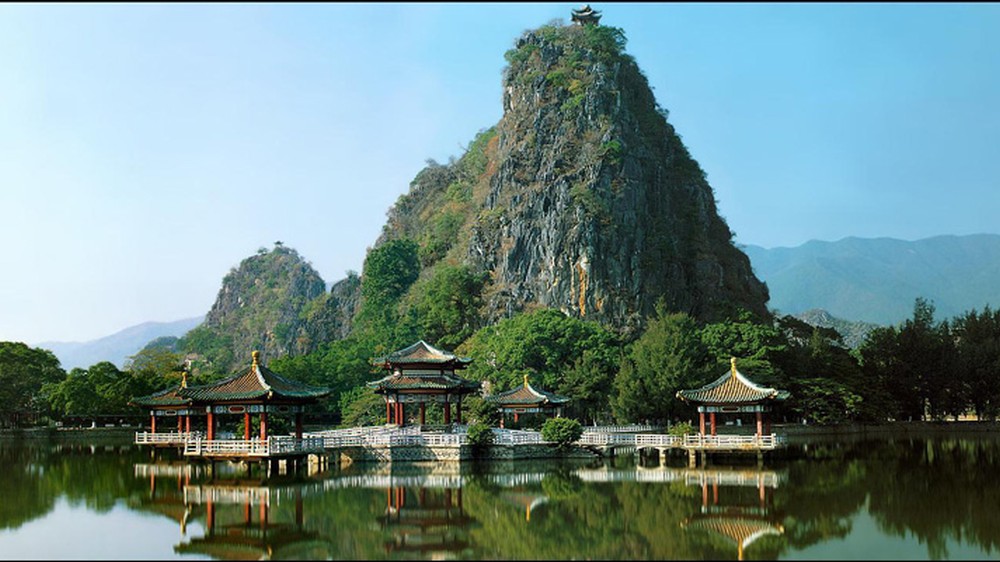 Zhaoqing has a total GDP of $30.2 billion, with machinery and electrical products accounting 36,1% of the city’s total exports. The utilized direct investment from Hong Kong companies represented 81,5% of the total investment in Zhaoqing.

The city is also rich in tourism resources, being known for its traditional handicraft products. In 2016, tourism was 13,7% of the city’s total GDP. With a total population of 4.06 million, Zhaoqing values its cultural connections with the territory and is keen to promote its Duan inkstone culture as a mean of boosting visitor numbers.